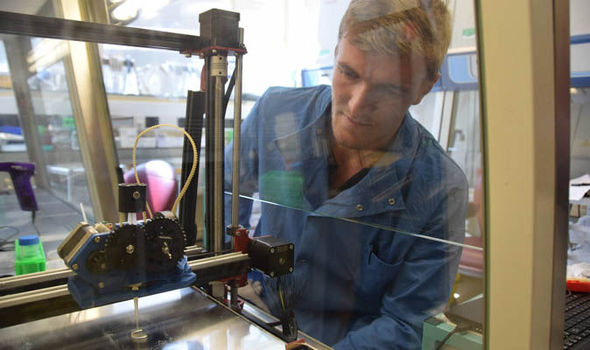 BRITISH scientists have discovered how to use a 3D printer to create living tissue and hope one day to “print off” human organs.

It is expected to pave the way for the production of complex tissues to replace diseased or damaged areas of the body such as knees and hips and eventually the creation of vital organs.

Lead researcher Dr Adam Perriman, an expert in cellular medicine at the University of Bristol, said: “This is a very exciting development which we believe could lead to a revolution in the treatment of diseases like osteoarthritis and other causes of tissue damage.

“This approach is taking the scientific world by storm in terms of its approach to regenerative medicine.” He added: “We believe this work will also help in the development of this new field bioprinting, which can be applied in other areas of medicine, including the treatment of burns, and even the development of organs.”

The new bio-ink has already been engineered to create 3D printed tissue structures including a full-size tracheal cartilage ring. The formulation contains human stem cells – which can convert to other cell types – along with nutrients and molecules called polymers which can change from solid to liquid according to temperature. Read More…