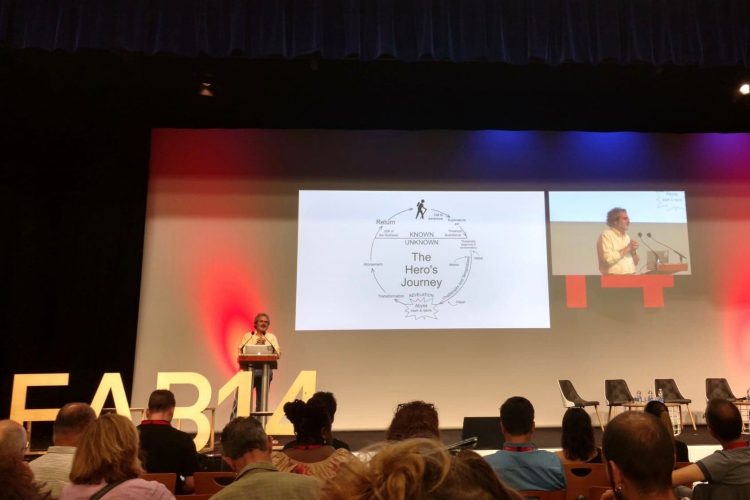 FAB14 Aiming for One Million Fablabs

Within ten years we went from 1 to 1,000 fablabs. During the next ten years, we are on the way for one million fablabs.

Inventing the resilient city, act 3. After the Fab City Summit and FAB14 Distributed, here comes FAB14, the international community of fablabs great meeting, taking place for the 14th consecutive year and held around the theme “producing resilience.” After Shenzhen and Santiago, the place to meet is in Toulouse as of Monday, July 16. The fablab Artilect, the first to have opened in France and organizer of the event, his president and co-founder Nicolas Lassabe reminds us, is expecting 800 labs.

On the rostrum of the huge conference room, in the basement of the Pierre Baudis Congress center, Neil Gershenfeld (professor at MIT and inventor of the fablab concept) also looked at the figures in front of the 600 participants who had arrived on this first day: there are today around 1,000 fablabs worldwide. However, it isn’t the number that counts, he says, “but what we do with the programs.” He then revealed the list: Machines that Make, namely rapid-prototyping of rapid-prototyping machines, the Fab Foundation and Scopes-DF, to develop the community and STEM education, the global initiative Fab City, to develop local urban production, and Fablabs.io, the fablab community network having adopted the MIT charter. “Here is an overused quotation from the hockey player Wayne Gretzky,” illustrated Neil Gershenfeld to convey his ambition for the fablab network. When asked about his secret, Wayne Gretzky answered: “Skate where the puck goes, not where it has been.” Understand: in order to have an impact on society, you need to feel the wind.

And, if we are to believe the forecasts of the founder of the movement, the winds are favorable. “Within ten years we went from 1 to 1,000 fablabs. During the next ten years, we are on the way for the million. At that moment, everything will collapse,” he warns. “What we have learnt for 1,000 does not work for 1 million.” The challenge of the network is therefore to be prepared for an exponential growth. To illustrate his point, the director of the Fab Foundation, Sherry Lassiter, launched into a PowerPoint presentation of “baby fablabs” – i.e. the children born in the community (one of which was present), and “fablab weddings.”