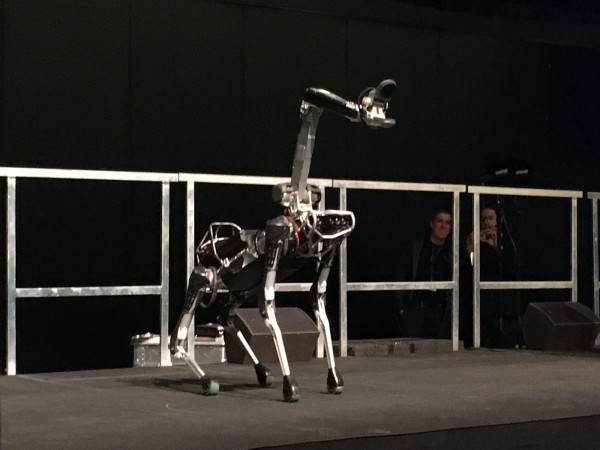 From MIT Technology Review’s Will Knight:

The nimble-legged robots under development at a secretive Google subsidiary are getting ever more capable and clever.

At a conference in Barcelona this week, Marc Raibert, the CEO of Boston Dynamics, which specializes in dynamically balancing legged machines, demonstrated some of the progress his researchers have been making.

Raibert demonstrated Spot Mini, the company’s latest four-legged robot, which is about the size of a large dog. Boston Dynamics has previously shown videos of Spot Mini operating in a mocked-up home—climbing stairs, opening doors, and even emptying a dishwasher using its gripper. The robot features a neck-like appendage and gripper that enables it to do simple, but potentially useful, manipulation tasks.

The robot is partially automated. A Boston Dynamics engineer steered a Spot Mini onto the stage during Raibert’s talk at the Neural Information Processing Systems conference. But the robot figured out for itself how to perceive and navigate the steps up to the stage, and then, once given the command, located and picked up a can from a table.

Legged robots could potentially be better than wheeled bots at navigating messy human environments, although the research robots under development at Boston Dynamics remain prohibitively expensive for now, some costing more than $1 million.

Boston Dynamics has built a reputation for developing robots capable of walking and running, even across treacherous ground using dynamic balance; that is, by constantly moving to maintain stability. The company has honed the technique over many decades to produce several stunning machines (see “The Robots Running This Way”). It makes a much larger quadruped, called Big Dog, which has been tested as a military pack mule, as well as a humanoid, Atlas, which took part in a robot rescue contest organized recently by the Defense Advanced Projects Research Agency (see “Why Robots and Humans Struggled with DARPA’s Challenge”).