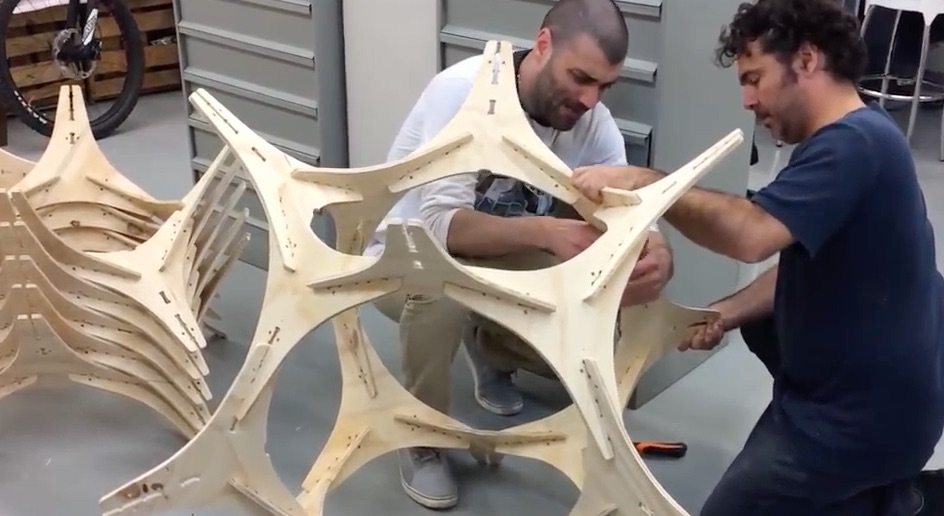 Video of the Pabellón Lat construction at #Fab13 available here!

PABELLÓN LAT – or LAT PAVILION – is a project that was born as an initiative of the Latin American network of digital manufacturing laboratories with the objective of integrating Latin American countries and consolidating a team committed to the development of the region and improving living conditions in Latin America.

The pavilion has been placed in the context of the world congress of digital fab laboratories Fab13 “fabricating society” in Santiago de Chile in August 2017.

In compliance with the objective of REGIONAL INTEGRATION, PABELLÓN LAT has materialized in modules of wood cut by computerized numerical control (CNC) machines whose shape simulates connected atoms that generate molecules. Each of the atoms represents one of the countries that has contributed to this project, which, when united, represents the Latin American network as a single molecule. In the process, the identity of the Latin American network has also been developed and will be applied, evidencing the link between the 12 countries that have joined the project.

The manufacture of the pavilion has been done in a distributed way in several countries like Brazil, Ecuador, Uruguay, among others. And the pieces were transported to the event to assemble them in Chile, along with locally made pieces, resulting in a perfect assembling structure with materials from different countries in a distributed effort.

Thus PABELLÓN LAT becomes the materialization of a collaborative and distributed effort among 12 countries of the region that unites the ancestral identity with modern technology, and an incredible human team with a view to generating projects of high impact in the region.