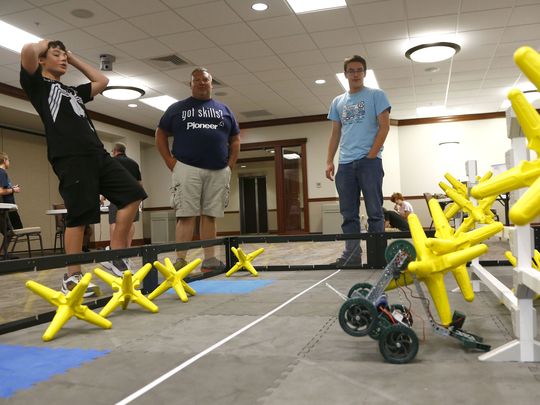 The team of Lexington 10th-graders had programmed their robot to throw a star over a bar for the “Starstruck” competition challenge, but when that didn’t pan out, they went back to the computer to tweak the code.

Perhaps they could use one star to knock another star into place. If that failed, Plan C would be to push a star underneath the bar and onto their opponent’s side of the arena. This trial and error process is exactly what Pioneer Career and Technology Center’s VEX Robotics Summer Camp is all about.

Funded by RAMTEC (Robotics and Advanced Manufacturing Technology Education Collaborative). the camp is designed to stoke middle and high school students’ interest in robotics and engineering. Now in its second year, the camp drew 18 students from schools throughout area and as far away as Brecksville.

Throughout the three-day camp, the 7th- through 12th-grade campers learn to design, build and program robots for a competitive task designed by VEX Competitions, a game-based STEM challenge with teams all over the world.

If the students enjoy the process, they have the option of taking their robot to competition later in the year. Rob Flannery, an industrial electricity instructor for Pioneer, said the local VEX camp serves as a feeder for his program, which prepares high school students to meet the area’s demand for workers with robotics skills.

Rob Smith, a RAMTEC consultant, said he believes the camps give students skills that will serve them well no matter what they do later in life— skills such as mechanical engineering, programming, problem solving, teamwork, critical thinking and strategy. Read More…