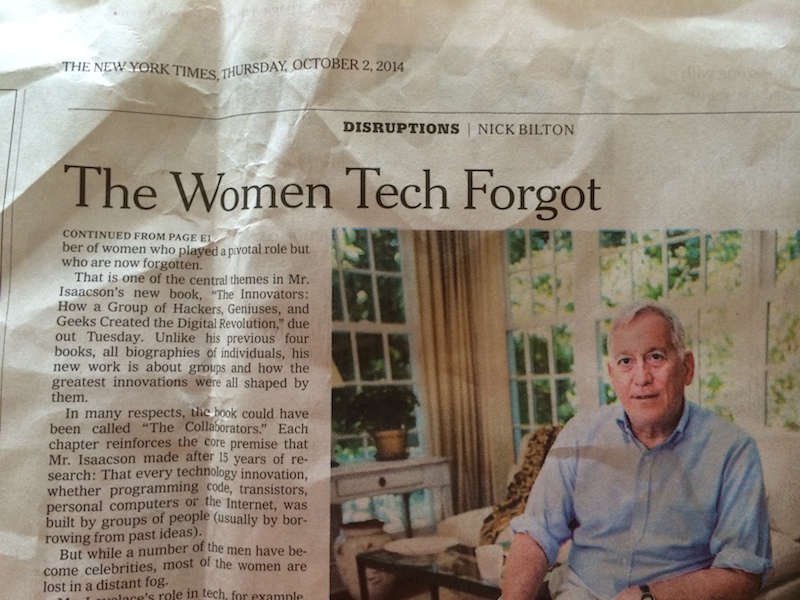 The New York Times published a relevant article about women in technology and how they were made invisible, which also made it impossible to have role models for young girls.

‘The Innovators’ by Walter Isaacson: How Women Shaped Technology

While spending the summer of 2007 in Aspen, Colo., Walter Isaacson and his wife, Cathy, spent much of their waking moments hounding their daughter to finish — or even start, for all they knew — her compulsory college essay. Finally, after hearing enough from her nagging parents, Betsy Isaacson locked herself in her bedroom until she emerged with a completed two-page essay.

“Congratulations, Betsy,” Mr. Isaacson recalls saying as they stood in the living room. “What did you write it about?”

“Ada Lovelace,” she replied. This was followed by a long, awkward silence. Mr. Isaacson, who was just beginning work on abiography of Steve Jobs, could not recall who Ms. Lovelace was.

“She’s one of the women who has been written out of the history of computing,” his daughter replied. While some in tech know of her, Ms. Lovelace, who lived from 1815 to 1852, is far from a household name.

It’s no secret that people are often erased from the history of big-tech companies. It’s so prevalent in Silicon Valley that it is known as “The Creation Myth.” But what may come as a surprise is the number of women who played a pivotal role but who are now forgotten.