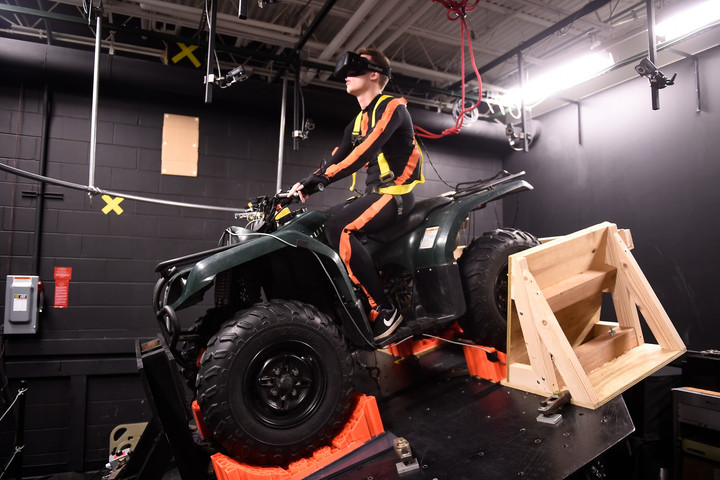 Ever have the sneaking suspicion that some academics get to have loads of high-tech fun under the flimsy excuse of publishing a few explanatory papers about it?

If you do happen to think this way — and are looking for a bit more evidence to support your sense of seething jealousy — check out the latest project to be created at the University of Iowa. Working with engineers from UI College of Engineering’s Center for Computer-Aided Design, researchers there have created an ambitious virtual reality simulator which mimics the effects of driving an ATV, complete with Oculus Rift headset, motion-sensing suit, and a moving platform that simulates changes in terrain.

Using this custom rig, it’s possible to mimic what it is like to drive an ATV on rough terrain: right down to simulating the forces exerted on a driver as they speed up and down hills, navigating obstacles and rough ground.

But as much as it looks like the world’s greatest VR video game, the project has a serious purpose — and it’s one that could save lives. “Since the 2000s there has been a significant rise in the number of injuries deaths caused by ATVs,” Charles Jennissen, a professor at UI Carver College of Medicine, who is helping lead the project, tells Digital Trends. “That could include people people getting struck by them, ejected, injured in rollovers, or sometimes even suffering traumatic asphyxia if their vehicle rolls on top of them and they’re unable to move it. This is a subject I’ve been investigating for several years now.”

Jennissen says that it’s always been his ambition to develop a simulator to allow more research into the factors which contribute to loss of control when ATVs are driven. It’s only with today’s technology, however, that this has been made possible. Read More...