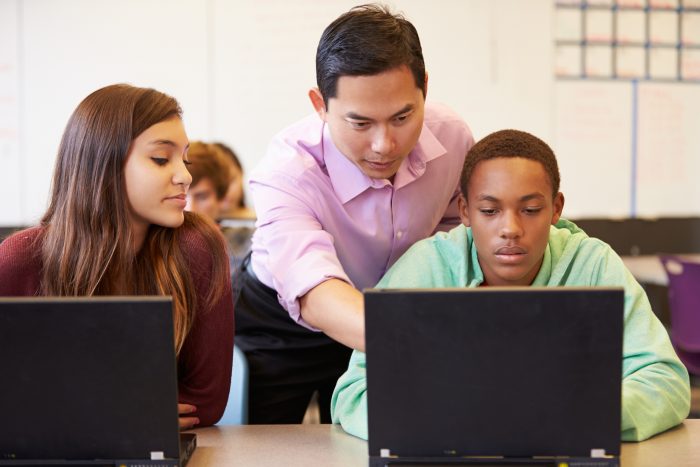 Posted By: Wilderon: May 18, 2017In: Technology in EducationNo Comments
Print Email

In a social-science classroom last year at Newton Bateman, a public elementary school in Chicago, each of the 6th-grade students grab a Google-powered laptop. The tech giant is transforming public education with its low-cost Google Chromebooks laptops and free apps.

The students open Google Classroom, an app where teachers make assignments. Clicking on Google Docs, a writing program, and they bean composing essays. Looking up from her laptop, Masuma Khan, then 11 years old, said her essay explored how schooling in ancient Athens differed from her own. “Back then, they had wooden tablets and they had to take all of their notes on it,” she said. “Nowadays, we can just do it in Google Docs.”

Chicago Public Schools, the third-largest school district in the United States, with about 381,000 students, is at the forefront of a profound shift in American education: the Googlification of the classroom.

In the space of just five years, Google has helped upend the sales methods companies use to place their products in classrooms. It has enlisted teachers and administrators to promote Google’s products to other schools. It has directly reached out to educators to test its products — effectively bypassing senior district officials. And it has outmaneuvered Apple and Microsoft with a powerful combination of its signature products targeted for the education space: Chromebooks and free classroom apps.

Today, more than half the nation’s primary- and secondary-school students — more than 30 million children — use Google education apps like Gmail and Docs, the company said. And Chromebooks, Google-powered laptops that initially struggled to find a purpose, are now a powerhouse in America’s schools. Today they account for more than half the mobile devices shipped to schools.

“Between the fall of 2012 and now, Google went from an interesting possibility to the dominant way that schools around the country” teach students to find information, create documents and turn them in, said Hal Friedlander, former chief information officer for the New York City Department of Education, the nation’s largest school district. “Google established itself as a fact in schools.”

Brooklyn-bred & Colorado-obsessed aspiring PR Guru who can't stop listening to music. Breaking into the digital space one tutorial at a time! Helping to provide the latest info about new tech for education.