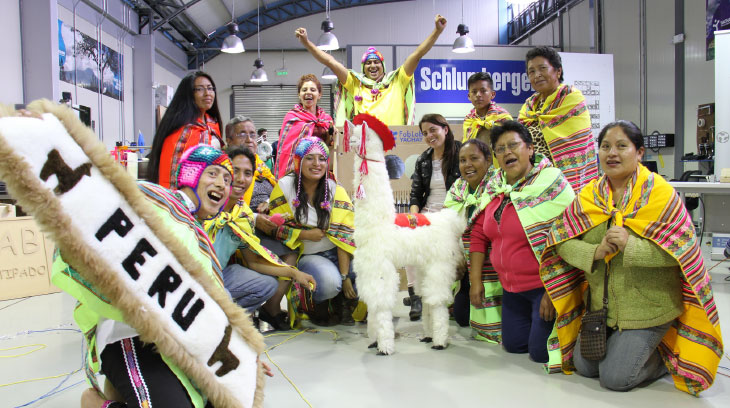 October 25th 2016 Fab Lab Yachay welcomed more than 200 visitors to the Open House that was organized on Entrepreneurship Week, in order to promote access to digital manufacturing and new design technologies.

Walter Gonzales, architect, industrial designer and professor at the Faculty of Architecture at the National Engineering University of Perú, presented the looms and digital production workshop based on his previous creation: Fab Loom. This low cost machine optimizes up to 60% of the traditional production of a loom and its manufacturing is as fast as the looms.

“In Lima local artisans are already using it and supporting with their own ideas and advices to improve the design. Everyone can build it in any Fab Lab around the world because it’s an open hardware loom”, commented Walter, bearer of the traditional knowledge of manual knit.

Yachay Tech students Iván Chávez and Ruben Pazmiño, work on the project of a plastic recycler which they named “Chamanga” in solidarity with one of the most damaged communities of Esmeraldas after the earthquake of last april and to whom its use will be designated as a source of employment.

Inspired by the design of the Dutch Dave Hakkens, Iván and Rubén explain that their project seeks to expand plastic crafts by using four machines: crusher, extruder, injector and a kiln, which is actually cheaper than the original idea. They built a machine’s prototype in Yachay and now they seek funding from the private sector.

Darwin Quishpe, student from Automation and Instrumentation career of the Technological Institute “17 de Julio”, presented the prototype of an oscilloscope, an instrument of electronical display for graphical representation of electrical signals that vary over time. This initiative began in the classroom and was implemented as part of the dual training institute.