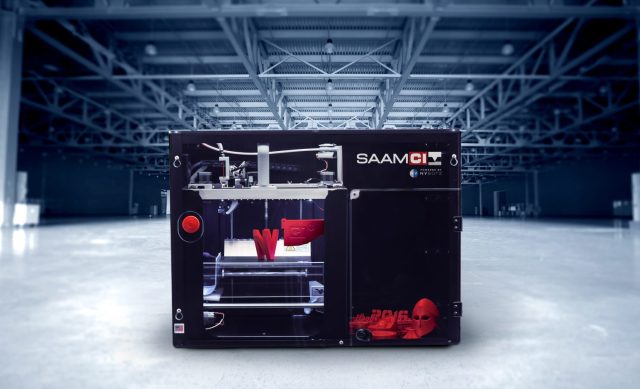 Just two years ago, Cincinnati Inc. (CI) and a fleet of partners stunned the world with the Big Area Additive Manufacturing (BAAM) 3D printer. At the International Manufacturing Trade Show (IMTS) in Chicago, the equipment manufacturer, along with Local Motors and Oak Ridge National Laboratory (ORNL), the body of a vehicle live in less than 48 hours. After machining and assembly the Strati concept car drove off the showroom floor and out of the building four days later.

While CI continues down the path of large-scale, rapid 3D printing, the firm has taken an interesting side trip into industrial desktop 3D printing, partnering with New Valence Robotics (NVBOTS) to sell the Small Area Additive Manufacturing (SAAM) 3D printer. To learn about how the new machine fits into CI’s larger business, ENGINEERING.com spoke to Rick Neff, BAAM sales manager for CI.

From BAAM to SAAM
The SAAM is, in some ways, a modification of NVBOTS NVPro 3D printer, a fused filament fabrication (FFF) machine that brings a high level of automation to the desktop 3D printer space. Like other FFF systems, the SAAM extrudes melted thermoplastic onto a substrate layer by layer, but it has added features that remove a good deal of manual intervention on the part of an operator.

Because the SAAM is controlled through the cloud using NVCloud software, anyone in an organization can send prints to the print queue. Once a print is complete, the SAAM uses a built-in print removal mechanism to lift the print from the bed and move it into a bin where it can be retrieved. Meanwhile, SAAM can begin a new job, allowing for 24-hour operation.

Rather than have a single engineer manage a farm of 3D printers, manually prepping print files, initiating the printing process and removing jobs when they’re complete, the SAAM makes it possible for a single administrator to run the operation from the cloud. The admin’s sole task is to approve or reject print jobs as they are loaded into the queue online.