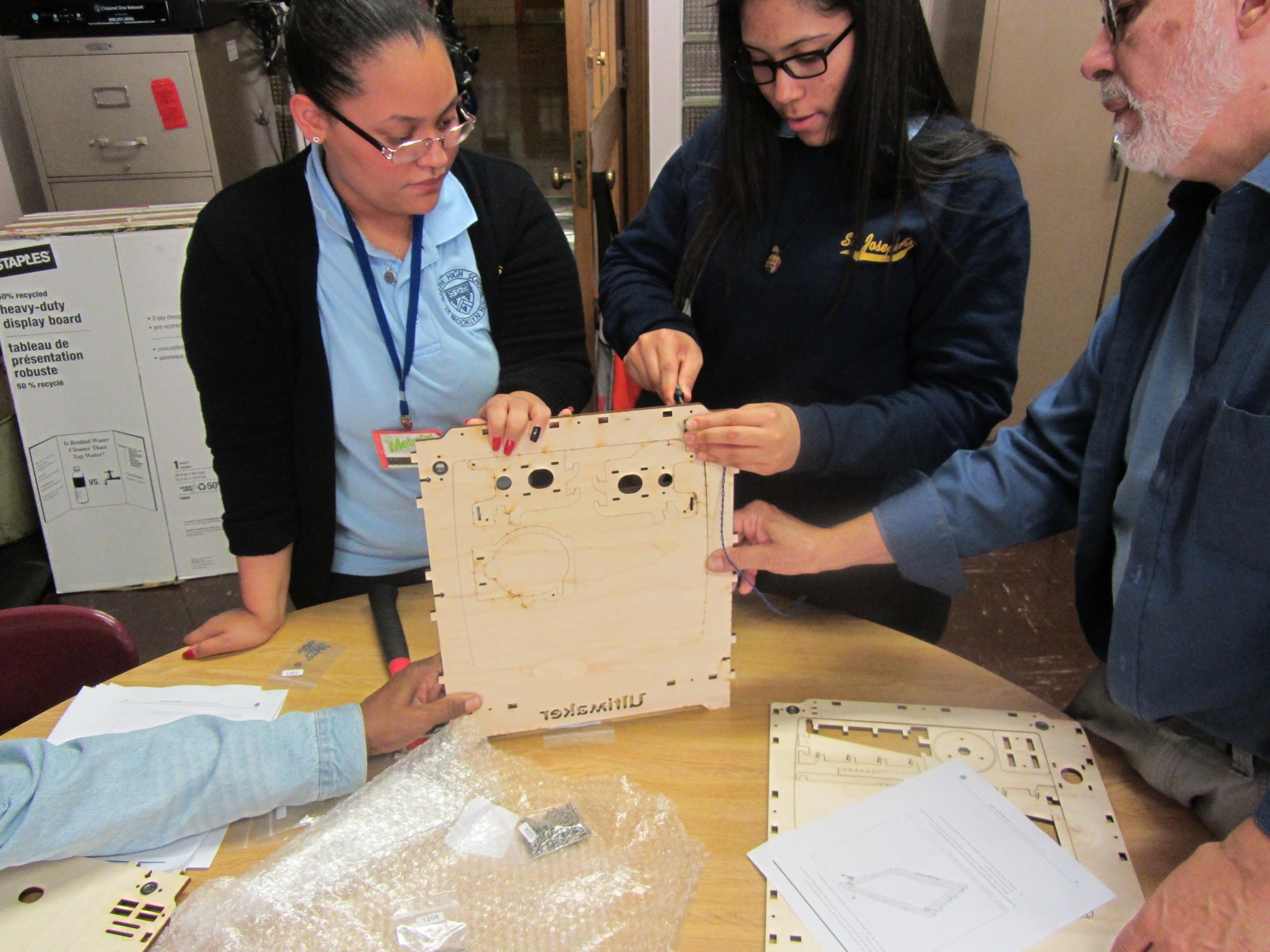 The School Fab Lab set up on October 28th by Fab Lab Connect at Saint Joseph High School is in full swing. The first project given to the SJHS students was to build an “Ultimaker” 3D printer from scratch. The students were excited by the prospect of actually building the machine themselves and put great effort and enthusiasm into constructing the 3D printer. SJHS teachers worked together with the students and documented the process with photos and comments on a weekly basis. In the end, the teachers and the students learned a great deal from each other during the weeks of collaboration it took to build the 3D printer.

The project of building a 3D Printer is a unique experience for students, whether they are young and assisted by teachers, or older and left to collaborate with one another. In addition to being a fun, communal project, students learn a great deal about the mechanical functioning of a 3D printer and the materials that make up the printer’s components. This knowledge instills confidence when operating the machine and provides an understanding of the process that goes into creating the varied objects that they will later print from the vast array of open-source schematics.

The advantage of building an “Ultimaker” from scratch, rather than receiving a pre-assembled model, is that the students will have an in-depth comprehension of the printer’s mechanisms as well as an increased desire to innovate. If the machine ever needs modifications or repairs at a future date, or if they ever want to create an object based on a schematic they have designed themselves, they are prepared. Finally, building a 3D printer with their own hands will allow students to realize how accessible, easy, and inexpensive digital fabrication has now become as well as the vast opportunities that it offers. The project will likely spur their interest in discovering (and building!) other digital fabrication machines such as CNC milling machines and laser cutters.

Students have begun spending time in a classroom filled with technology that includes 3D printers, laser cutters, milling machines, vinyl cutters and a computer that can program machines to do special commands on demand. Students at St. Joseph’s H.S. in Downtown Brooklyn are being taught digital fabrication and computation first-hand through a variety of projects and machines.

Jessica Peters, a senior, wants to be a biomedical engineer one day. “Learning digital fabrication and other technological processes definitely empowers me to be the best that I can be,” said Peters. “I have a passion for engineering, which is a male-dominated field, creating great challenges that I will work my hardest to overcome.”

We were able to set up a Fab Lab at Saint Joseph’s H.S. thanks to our collaboration with Fab Lab Connect, which helped us organize our space, select and set up the necessary equipment and machinery, as well as providing teacher training, professional development, student activities, and continuous support. One component of being part of the Fab Lab Network is being able to connect with the larger community of inventors and creators that spans at least 80 countries, which creates a global network of research and invention. We are all very excited about the prospect of connecting with other schools across the globe.

In addition to assembling a 3D printer furnished by Ultimaker, the school has begun printing 3D printed prosthetic hands.“It empowers me to grow and help the world… like printing prosthetic hands that will allow kids without a hand not to feel different in society but ‘cool,’” said Samantha Acosta, a junior at SJHS.

Thursday, October 6th sparked a new beginning for SJHS. This is the first meeting for the building of a 3D printer. The main objective of today’s meeting is to explain what we will be looking forward to in the near future. At this meeting there were 12-15 girls gathered around a round table where Ms. Latham introduced the project. From the time the girls started processing the idea, I could readily see the enthusiasm on the student’s faces. Ms. Latham told us we are 1 of 5 schools chosen by “Ultimaker” to build a 3D printer. The crazy thing is, I think a lot of the girls were shocked by the fact that they would be building the 3D printer themselves. We took out some of the parts from the 3D printer box and read off the items listed. After that was finished, we closed the meeting by coming up with a new schedule where students would rotate in every three weeks. I can tell this is going to be a great journey.

On October 13th, the second Thursday of the month we started to build our masterpiece. Kenesha from 10th grade, Samantha from 11th grade and Jessica from 12th grade are putting together the framework for the printer. The first thing I noticed is that even the smallest task must be done the right way; and that reading directions would be crucial.. The first set of frames are wooden and have a very smooth surface. Building this 3D printer will definitely take time. The next thing the group had to do was find the limit switches and the bolts for the frames.

Since the girls had to locate the different bolts for various areas of the printer it took a while to identify all of them. The box doesn’t tell you which was which so the girls had to use prior knowledge to figure out what bag had the right bolts. When constructing a project it is good to feel the material being used, and then test it out. Even though each step takes time, the girls seemed so interested and happy, that the amount of time being spent seemed to mean nothing to them. That sort of dedication is hard to find, no matter what club you’re in.